Last week, my cravings for dim sum were at an all time high. So much so that I contemplated flying to Hong Kong just for a meal and to see my kid sister of course (ehhh not really, sorry C!). Having spent a good chunk of my formative years in Hong Kong, there are some things that spoil you, like that spectacular view of the harbour, great public transportation and of course all kinds of Chinese food, particularly the slew of dim sum places scattered around the city.

Yum cha, which translates to drink tea, was a staple for my family and friends when I lived there (that and high tea but we’ll get to that in another entry). We would go to a dim sum restaurant in lieu of brunch and order dozens of small dishes ranging from dumplings to chicken feet to steamed buns  and eat and drink and eat and drink until we were full. And believe me, we were always full.

After calling out a distress signal to members of an online food group, I settled on Bruce Lee in Nonhyun-dong, dragging my friend Eugene along with me. I actually laughed when I saw the building because of how kitschy it looked but I suppose with a name like Bruce Lee, you shouldn’t expect anything less than a replica of a Chinese pagoda fitted with  lanterns outside.

‘Are you sure you can eat all that food?’ Eugene asked dubiously as I gleefully ordered dish after dish.

‘What kind of question is that?’ I responded as I perused the menu for more.

While the selection at Bruce Lee isn’t particularly large, the staples of siu mai (shrimp dumpings) and xiao long bao (pork dumplings with soup) are on the list as well as a few others you’d find when having yum cha in Hong Kong. It wasn’t the most spectacular dim sum meal I’ve ever had but it is definitely the most authentic you’ll get in Seoul and a good starting point for those who haven’t tried dim sum before. Additionally, I recommend the guo bao rou (the sweet and sour crispy pork dish) which isn’t pictured here and suggest skipping out on the flat rice noodles as they weren’t really up to par but overall, the meal curbed my cravings enough to not to anything rash (like booking an impromptu plane ticket) and will tide me over until my next trip! 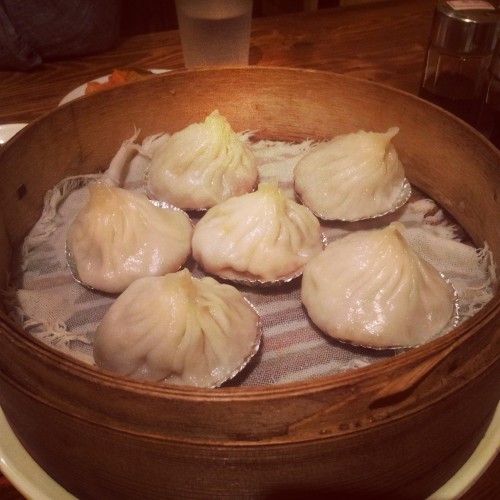