I’m a creature of habit for the most part. That being said, my habits weren’t exactly what you’d call healthy if you know what I mean… Like the 2-3 cups of coffee a day, the cheesy carb overload alongside the ridiculous amount of alcohol topped with decadent desserts. I don’t consider myself a foodie despite the fact that 80% of the posts on this blog are under the ‘epicure’ category but I did (still do) appreciate the finer things in life in abundance.

Now, being a creature of habit, I’ve found that I was able to quickly adjust to the new lifestyle change when eating at home. Despite having several bottles of wine, three limited edition bottles of scotch and a fair share of chocolate that I can no longer consume, the pantry and fridge are now fairly post op TSG friendly with lots of vegetables, gluten-free and dairy-free alternatives.

The issue is eating out.

Let’s say I’m craving something sweet – not something that happens often, so when it does, it’s right to indulge right? But everything in the Korean market is full of flour, sugar and milk which makes it a no no for me.

And then I was introduced to Plant, a vegan bakery/cafe in Itaewon. Plant is the brain child of Mipa who also runs the blog Alien’s Day Out, a great resource for vegetarians, vegans and reluctant in betweeners like me. When I first came across the blog several years ago, I’m pretty sure I rolled my eyes and skipped past it. Vegan? Ugh no thank you. Why would you do that to yourself? Yeah… karma’s a bitch.

It was packed to the brim when I arrived in the early evening and there were people actually leaving because of the limited seating. But small isn’t always a bad thing and the lack of space actually gave it an intimate feel, like you’re hanging out at a friend’s place.

There were still a few things on the menu I couldn’t eat/drink like because of the soy and gluten but I saw a particularly delectable gluten free, vegan, banana choc chip muffin (W3,000) sitting on the counter and decided to give it a go. I have to say, I was impressed. It was a gazillion times better than the dry excuse for muffins that they sell at your run of the mill Seoul bakeries.

Hoping Mipa whips up a few other flavours in the future. You can also find her baked goods at High Street Market. 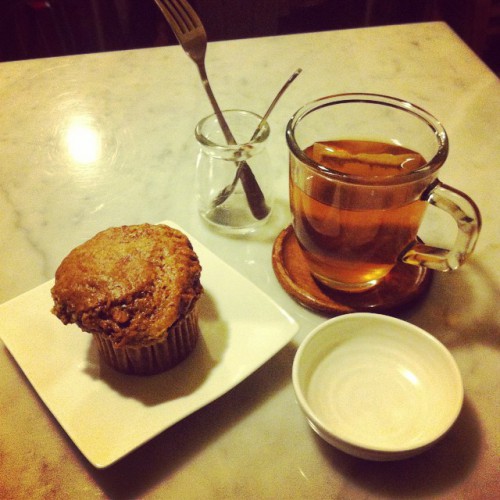